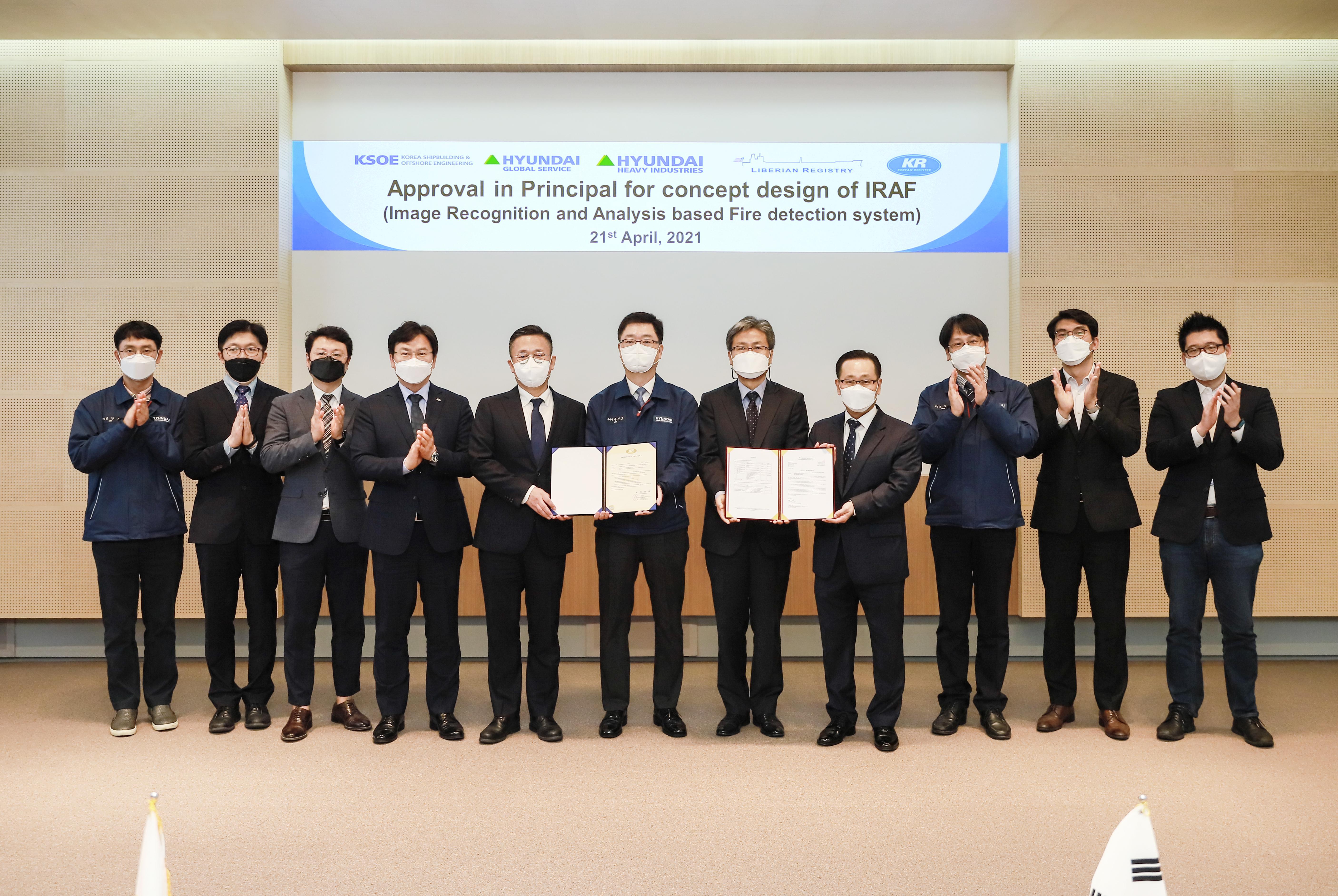 Hyundai Heavy Industries Group independently has developed an Artificial Intelligence (AI) based safety management/monitoring system (HiCAMS) and obtained  classification and flag Approval-in-Principal (AIP) for the first time in the shipbuilding industry. This new method will beone of the core technologies to manage and control safety aboard next-generation smart ships and autonomous ships.

This advanced and ground-breaking technology has been approved by the Korean Register of Shipping (KR, Class Society), and also approved by the Liberian Registry (Flag State administration).  Having the approvals of a leading and innovative flag State such as Liberia and working closely with KR are huge steps that have laid the foundation for expanding the application of this technology to the global fleet, and providing valuable increases in vessel safety.

This AIP is the world's first classification certification for computer vision-based AI solutions for ship’s internal fire monitoring. This technology would provide a modern replacement option for existing fire monitoring sensors with an AI-based early fire monitoring system that combines image recognition/processing technology, ship interior and fire big data, and advanced AI algorithms. The fire monitoring sensor used in the past takes up to 2 minutes to detect a flame or smoke by the sensor. The developed system based on video/deep learning has greater speed and accuracy of fire detection by enabling immediate recognition. As a technology that can significantly reduce the risk of fire inside a ship, it has great effect and power, so it is great interest to both shipping, regulatory, and shipbuilding industries.

An official from Hyundai Heavy Industries Group said, “It is meaningful in that it is the first shipbuilding organization to incorporate artificial intelligence into the field of ship safety management.” And “Starting with the development of this AI-based fire monitoring system, we will preempt the future Autonomous Ship era by expanding it to the entire ship safety field”

Starting with this image-based AI fire monitoring solution, Hyundai Heavy Industries Group is planning to develop technologies gradually that can detect various accidents and emergency situations (personal accidents, oil leaks, dampness, container overturns, etc.) that may occur in inside and outside of the ship during ship operation. Such AI-based ship safety management/surveillance system is expected to be actively applied as an essential system for safe navigation, and further applicability aboard autonomous ships that are currently being developed.

Meanwhile, Hyundai Heavy Industries Group independently developed and commercialized the navigation assistance system (HiNAS), the core technology of autonomous ships in 2020, for the first time in the world.  HHI has also developed a virtual commissioning solution based on digital twin (HiDTS) in early 2021.  HHI is further working on AI solutions for the development of next-generation smart ships and autonomous ships, such as succeeding in developing artificial intelligence solutions for ship internal safety management.